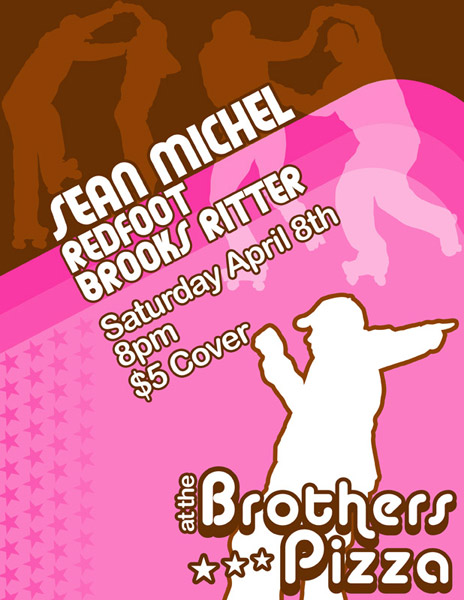 The Brothers Pizza was a popular pizzeria in my home region of Western Kentucky ran by two friends. It also hosted concerts for local artists, as well as national touring acts. They contracted me to design posters for all of their shows for a time. This vintage concert poster design features a roller skating theme and is one of my favorites.

Sean Michel is an amazing Gospel music singer, as well as an accomplished Blues guitarist. He was fresh off his famous appearance on American Idol at this time. Bowling Green, KY Alt Country and Folk Rock group Redfoot was also on the bill. Louisville’s soulful storyteller Brooks Ritter rounded out the show. A concert featuring this much talent needed a bright, fun design to complement it. I was big on using silhouette elements this time. Thus, I chose to center this poster layout around them. I used a dynamic pointing male figure as the central image behind the phrase “at the Brothers Pizza”. Then, I faded two couples skating into the background in order to add some fun.

I then continued the 1970s feel with a fun Neapolitan color scheme. Various shades of pink and brown in the background also display a subtle stars and stripes theme. I had fun with the retro typography treatment, mixing three fabulous fonts together. I tilted the show information so it would lead your eye down to the main image and venue name. The brown strokes and shadows both help the white text to pop off of the background.

Contact me for your own vintage concert poster design

You have a big rock show coming up, so you need a look that stands out! I am your man. Contact me today to get started.