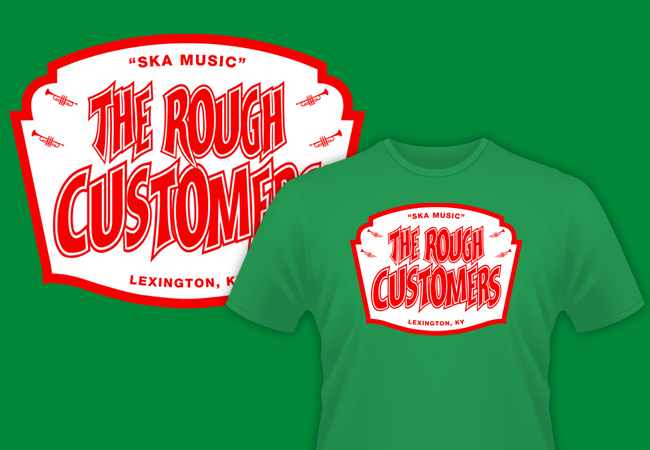 My friends in Lexington’s favorite (only) ska band The Rough Customers approached me for a new band shirt graphic design. They requested a parody of the famous Ale-8-One soft drink logo. Ale-8-One (“A Late One”) bottles their ginger based soda near here in Winchester, KY. Since it is a symbol of Kentucky culture, the band chose it to represent them at both local shows and tour dates. Also, the band had just added a new singer, so new merchandise would be a great way to celebrate the new era of the band.

Many of my projects involve brainstorming ideas with clients. However, we did not need much back and forth discussion for this shirt design. The band simply requested a parody logo replacing the product name with their own. The design would go on a kelly green shirt, reminiscent of the brand’s bottles. I suggested replacing the stars in the original design with trumpets, in order to give it a subtle nod to the band’s genre. 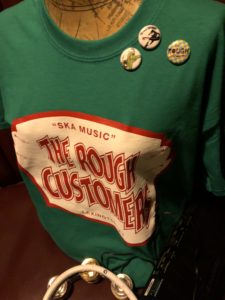 The new shirt debuting on the band’s merch table.

I began the design by tracing the outline of the soft drink’s signature red and white badge. The brand name actually uses a hand drawn mark, instead of a conventional font. As such, I studied the original. I wondered what other characters would look like if they were written in this style. Then, I began working in Adobe Illustrator. I started with the conventional sans serif font Myriad Pro, spelling out each letter. After that, I outlined them, and warped them using envelope filters, as well as the pen tool. I spent the bulk of my time getting the sizes and weights of each new character just right in order to mimic the original logo’s feel. Finally, I substituted the aforementioned trumpets in place of the original’s stars. The end result? The Rough Customers‘ fans loved donning the bright green, red, and white shirts while skanking at the band’s shows.

Do you play ska, punk, metal, rock, or even easy listening? I’ve got you covered. I love designing shirts for bands and music artists. Contact me today to get started.