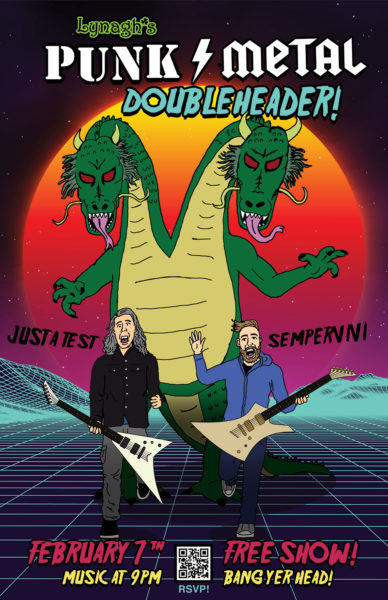 Before the pandemic, my band Sempervivi booked a show in Lexington with our friends Just a Test. Since it took place at our favorite watering hole Lynagh’s Irish Pub, I decided to make it a theme event. The styles of our bands were different enough (pop punk and thrash metal) to be the main selling point. I noticed that vintage 80s “space grid” fantasy scenes were trendy, so I tried my hand at it. This metal concert poster mixed one of those grid layouts with hand drawn figures and retro fonts.

First, I drew images of Will and myself running for our lives in pencil. I referenced photos of Will to confirm his typical dress and facial features. Then, I drew the two headed dragon freehand. After I finished the initial sketches, I scanned them in and “inked” them using my USB drawing tablet. Then, I used Photoshop to color in the figures and combine them into one scene. Pointy Jackson guitars appeared in our hands to emphasize the “80s metal concert poster” theme. I added shadows in order to create depth.

Are they “good” drawings? No, but that’s not really what I was going for. I wanted to combine a lo-fi “doodle” with the retro fantasy scene in the background.

I had a lot of fun with the poster’s typography as well. Mainly, I leaned on the manic title font made famous in the horror film franchise Friday the 13th. For the word “Punk”, I scattered a stencil font. I typed “Metal” in another vintage font reminiscent of the AC/DC logo.

Are you planning a future concert event? Punk and metal concert poster art is my bread and butter. Contact me today so we can plan the right promotional art together. 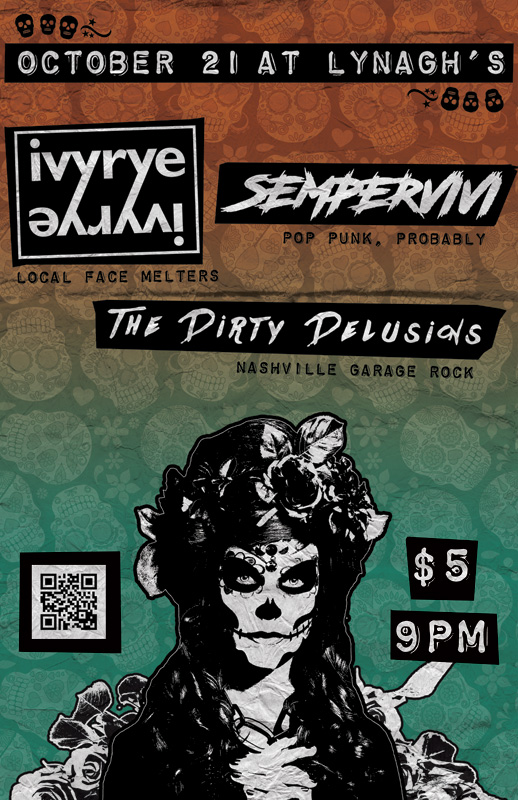 Garage rockers The Dirty Delusions brought their stunning live show to Lexington on tour in October 2018. Their management tapped my band Sempervivi to open, and also employed me as the concert flyer designer. The event was close to both Halloween and Day of the the Dead. Therefore, I decided on a spooky theme for the 11×17″ poster.

Let’s face it. Skulls are awesome. We all have one. They just look cool! Since Mexico’s Day of the Dead was just days away, I employed a stock photo of a woman in costume with a skull face paint design. Then, I added more roses around her to add more weight to the image. I simplified the photo to high contrast black and white and overlaid a scan of some crinkled paper. This gave it the appearance of a rough photocopy.

Next, it was time to add information about the event. I rounded up each of the bands’ logos. Most of the time, I do not incorporate band logos, but thought doing so would help this design stand out. I “cut out” rough black rectangles as backgrounds to imitate patches with said logos.

To complete the DIY punk rock feel, I set the rest of the text in a “label maker” style font on additional simulated cut outs. I then added sugar skull ornaments to help emphasize the date and location at the top. The QR code let anyone with a smartphone access the Facebook event to learn more and RSVP.

Finally, the concert flyer design background incorporates a green to orange gradient to imitate vintage concert posters. I blended in a seamless black and white sugar skull pattern to complete the theme.

Hire me for your band’s concert flyer design

An eye catching poster makes a huge difference in audience perception. Do you want look more professional, as well as draw more fans to your shows? Of course you do! Contact me today. 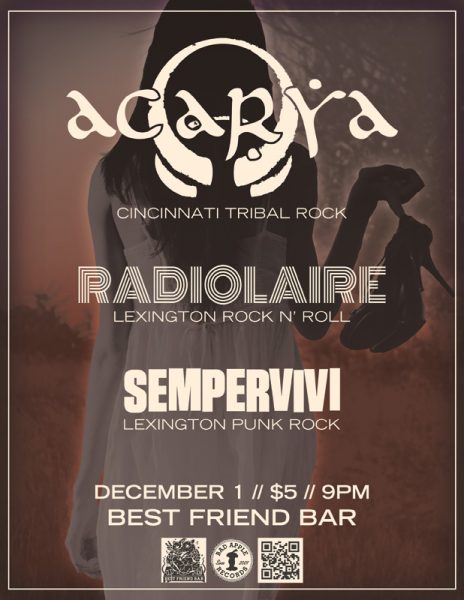 I created this flyer design for a tour date my longtime friends Acarya were playing with my project Sempervivi in Lexington. They are a Cincinnati based band with a unique, percussive sound they describe as “tribal rock”. They combine both acoustic and electric guitars with a customized drums and percussion instruments. Alternate tunings, as well as chanting vocals get their audiences’ feet tapping and heads bobbing.

In keeping with the band’s earthy vibe, I chose a stock photo of a mysterious female walking in a field surrounded by woods. I first reduced the colors to black and white. Then, I cut out the figure to separate it from the background. I did this so I could color her in a separate tone from the rest of the image.

I only slightly toned the central figure in a faint creamy yellow. Next, I gave her a nuanced glow to create an otherworldly effect. I colored the wooded background in shades of rusty orange and red. I was careful not to make the background too bright and overpower the text in the foreground. Finally, I added a faded black overlay and inner shadow. Because of this, the image retains a dreary, blurry feel, not unlike one of my favorite horror films, The Ring.

Since I had logos for each of the bands on hand, I decided to incorporate them. I overlaid each element in the foreground with a dingy yellow. They are still bright, while not overpowering the background image, as I felt they would in white.

All of the band genres, date, venue, and other information is set in light weights of the Trade Gothic font. I added logos for the venue, my record label, and a QR code for the Facebook event at the bottom. Last, I framed the it all with a fine inside stroke.

I have been designing posters for bands and concert events since I started in 1999. Contact me today for your own flyer design. 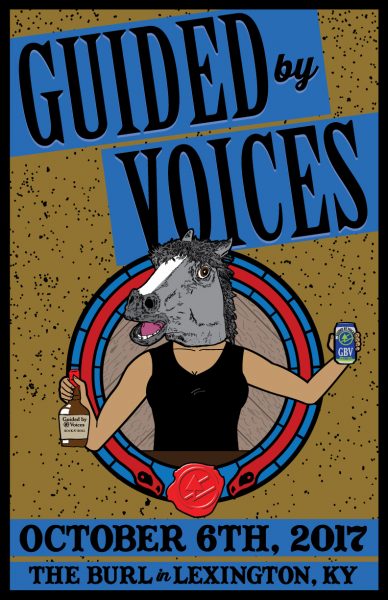 The legendary indie rock band Guided by Voices scheduled a tour date in my hometown of Lexington, KY. As such, they were in need of a custom concert poster design for it. Their New York City based management company found me via Google search and then contacted me to pitch a unique proposition.

The group asked me to design, print, and hand number a limited edition of 100 show posters. After approval of the design, I would then mail one copy to management. I also was required to hang a few copies at the concert’s host venue, The Burl. Finally, on the day of the show, I could set up a table next to the band’s merch station and sell the rest. I am always selling my own services. Therefore, I jumped at the chance to take part in this project.

Guided By Voices gave me carte blanche creatively. It was totally up to me to determine the poster’s artistic concept, as well as the subsequent design. The band had only rejected one poster art in their 30 plus year existence. They had developed a keen taste for quality design over their many years in the business. My reputation locally here in Lexington, KY for concert poster design preceded me. It felt great to know that both the iconic rock band and their management had so much confidence in me.

First, I Googled other posters that were designed for the band’s previous tour dates in order to do some research. Most of the other graphic artists sought to emulate screen printed designs. Thus, they only featured three or less colors in their posters. My planned design necessitated more colors. I wanted to create a flat, cartoon style illustration. It had to convey the necessary information while staying both fun and unique.

From the start of the project, I knew I wanted to incorporate an equestrian theme. Also, I intended for the piece’s concept to tip it’s proverbial hat to the culture of my home state of Kentucky. I felt that it was a bit too cliche to use an image of a horse race as I initially had planned. All of my favorite concert posters incorporate a striking, slightly odd focal image. I had to think outside of the box. I traveled down to the uncanny valley by drawing a rowdy bartender wearing a rubber horse mask. Those who know me are well aware that people wearing realistic animal masks make me very uncomfortable. However, I resolved to face my fears by drawing this poster’s focal image.

The masked bartender brandishes a bottle of bourbon in one hand and a can of beer in the other. These containers mimic native Kentucky brands Maker’s Mark and West Sixth Brewing respectively. However, they incorporate the band’s icon logo and name instead. The main character stands behind the bar and in front of the The Burl’s signature wood paneling. Also, I framed her popping out of a circular, bright red and blue stained glass design. This is similar to the club’s famous circular window, which has been seen glowing on stage behind many iconic musical acts over the years.

Finally, I topped the main image off with a faux red wax seal. This seal resembles the one that is used by Maker’s Mark for their branding. However, it showcases the GBV icon logo instead of the Maker’s text. I achieved this effect by using an SVG Emboss filter in the Adobe Illustrator application. 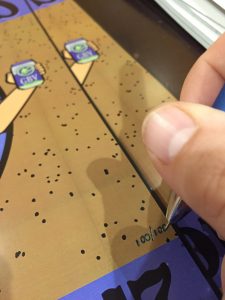 Hand numbering the prints to sell.

I splattered the light brown background behind the main elements with various black spots. This gives it an appearance similar to a cork board. The entire poster is framed in with a thick black stroke. This ties all of the elements together and adds just enough weight to it. Last of all, I highlighted the text with a darker shade of the electric blue featured on the stained glass window frame.

I set the main title in a mix of both the Birch Standard tall serif and Thirsty Script Extra Bold fonts. To add depth, as well as emphasize the words “GUIDED BY VOICES”, I added a faint white shadow effect. I also tilted the main title to make it stand out and create the appearance of motion. I wrote both the date and location of the event in an old west style font called Captain Howdy. To make it resemble the font The Burl uses in their own logo, I modified the original font by closing in the characters’ open spaces. The word “in” repeats the usage of the popular Thirsty Script font, adding some variety to the bottom text.

Everyone praised my poster design, ranging from the band’s rabid Facebook fan base to the owner of the club. What could be better than creating an effective advertisement that also doubles as a collectible art print? This was a very is fulfilling experience for me overall. As of this writing, I have a very limited stock remaining. Buy one for yourself!

Contact me for your own custom concert poster design

Are you a concert promoter or perhaps a touring band with a big date coming up? You need an original art piece that will turn heads and sell tickets. You need me to create your custom concert poster design. I have designed countless print ads to promote events since I started my own graphic design business in 1999. Contact me today to get started.