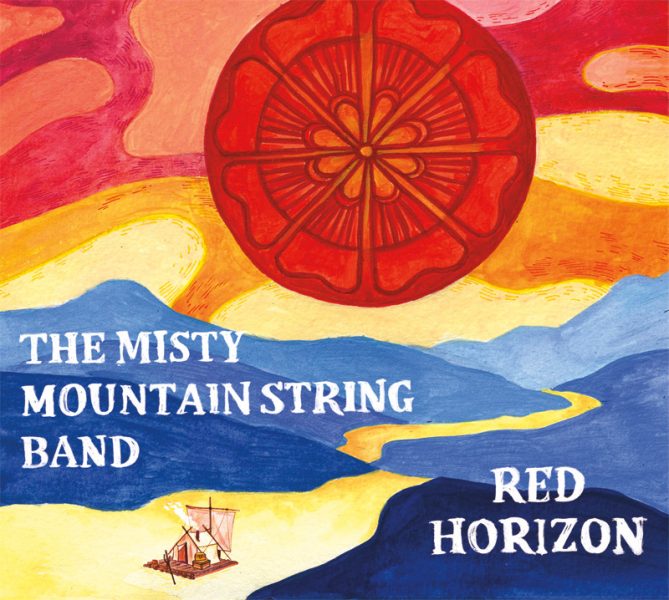 This is the third CD design I made for my old friends in The Misty Mountain String Band. Their second full length album “Red Horizon” continues to explore Bluegrass, Americana, Folk, and Gospel Music. The old time quartet returned to a Nashville studio to make this record. The famed producer Steve Thomas was once again at the helm.

I worked closely with both Pittsburgh nature illustrator Abby Diamond and Louisville photographer Cherise Mingus. We first collaborated on MMSB’s “Went to the Well” EP in 2013. Then we worked together again in 2015 on their debut LP “Brownsboro”. The band sent me Abby’s fabulous art to arrange and intermingle with Cherise’s tasteful posed shots. Summer festival season was fast approaching. I worked diligently to meet a tight deadline and get this CD layout package to print.

Upon its release, music critics everywhere unanimously praised this effort. Online outlets such as Huffington Post featured the album alongside articles on country luminaries like Dolly Parton. It also garnered interviews with respected music blogs including Independent Artist Buzz and No Depression. Listen for yourself. Buy “Red Horizon” on iTunes. It was a huge privilege to lay out art for yet another fantastic MMSB record. Knowing that the band trusts me to get their art laid out correctly and crush their deadline every time is very satisfying. CD art projects such as this one are some of my favorite tasks to work on. This fact is especially true since I get to work hand in hand with other creative visual artists. Are you a musical act that is located in Louisville, Lexington, Nashville, or anywhere else in the world? If you are in need of a quality CD design or layout, then contact me. 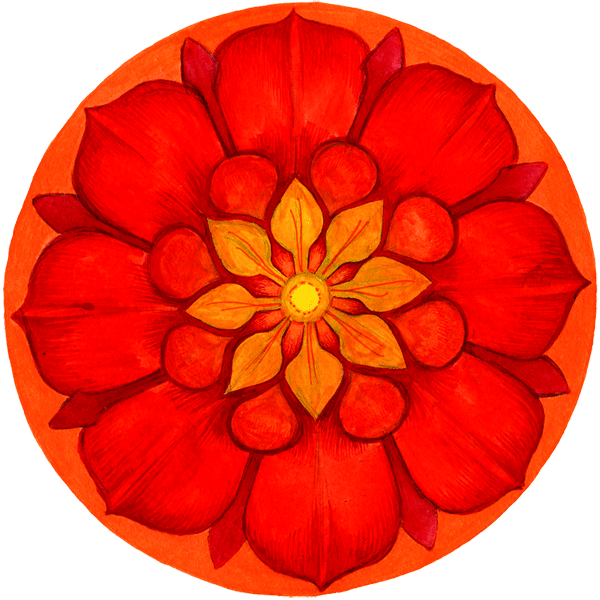 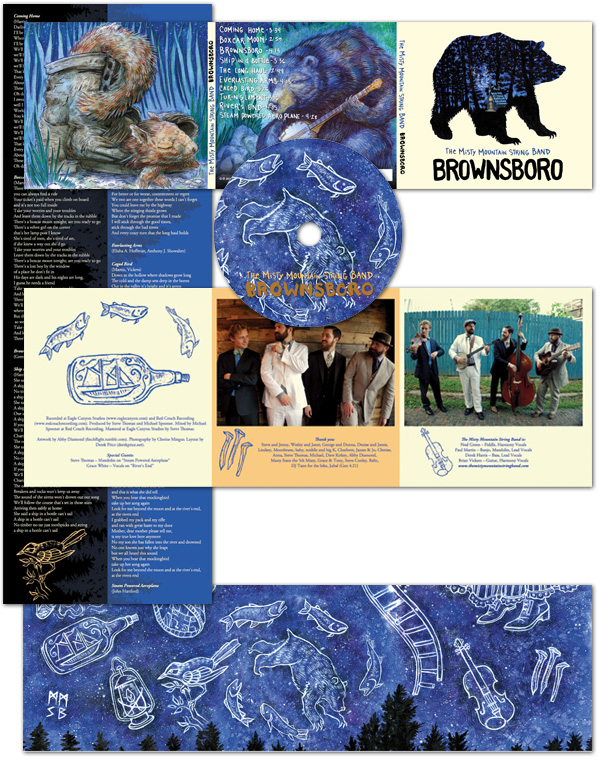 The Misty Mountain String Band are a popular bluegrass quartet who are based in Louisville, KY. After I worked with MMSB on their 2013 debut EP CD “Went to the Well”, they then asked me to design their first full length Bluegrass CD layout. “Brownsboro” is a deluxe package, since it includes an extra six panel insert that slides into the digipack. The band’s debut long player also once again featured illustrations by the amazing and talented artist Abby Diamond as well. Also, Louisville’s Cherise Mingus returned in order to capably handle the band’s posed photography shoot.

Laying out Abby’s gorgeous illustrations for the second time was also an absolute treat. I then listed the song’s lyrics one side of the six panel insert. Images appear as constellations as they come alive in the night sky on the other side. The rest of the layout’s color scheme complements Abby’s art in the insert. The pale shades of orange and yellow allow the deep blacks, greens, and blues to stand out. I also extracted many of the “constellation” images and reusing them for the additional content. I crushed MMSB’s deadline to get the art to press, since their timeline was tight. Their sophomore album was ready in time for their summer tour of Bluegrass festivals. College radio stations and album review blogs were also ready to spin the new disc. 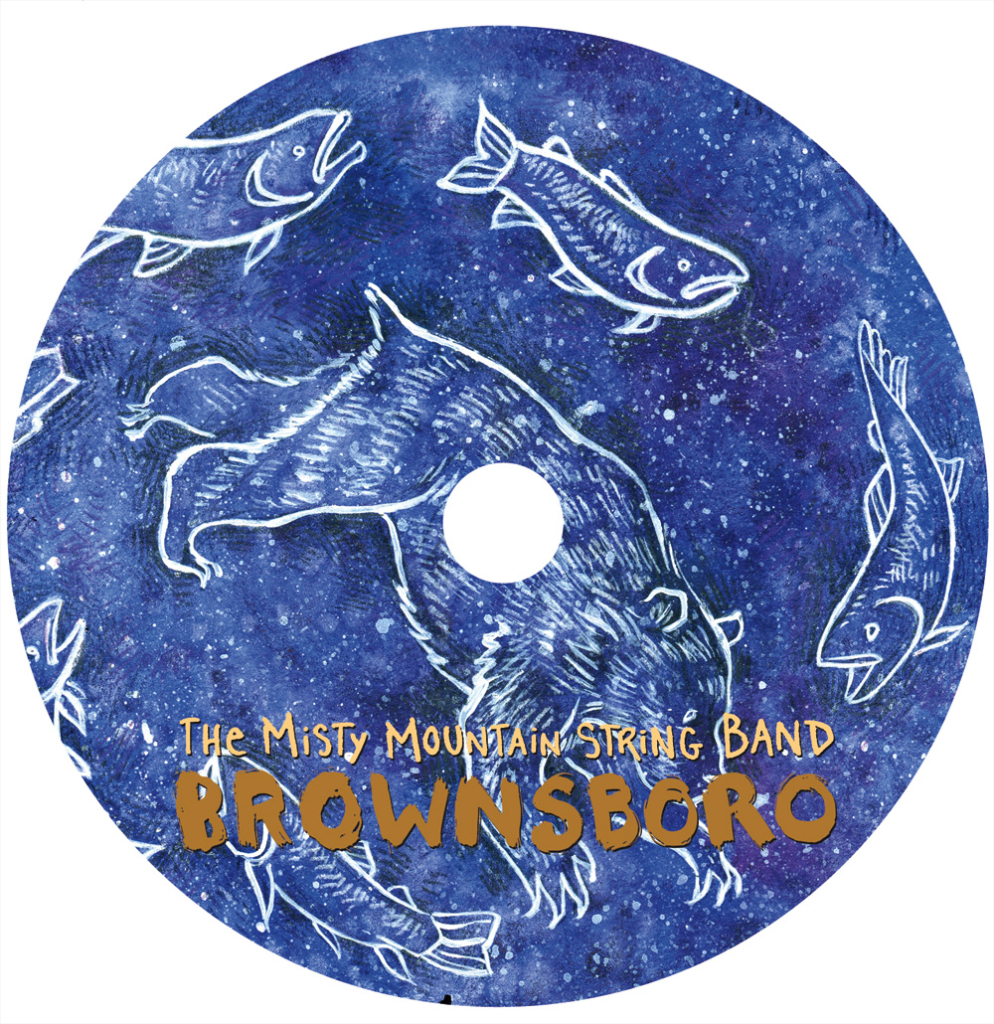 Your old time quartet is running on all cylinders. You’ve got the picking part down pat. Next, you just need the right image to accompany your music. Let me get you grinning as well with a professional album artwork design. See the gallery above for details of each section, then contact me for your next project.
Filed Under: CD Layout and Digital Download Art Design Tagged With: americana, bluegrass, cd layout, folk, illustration, louisville, misty mountain string band, music, string band