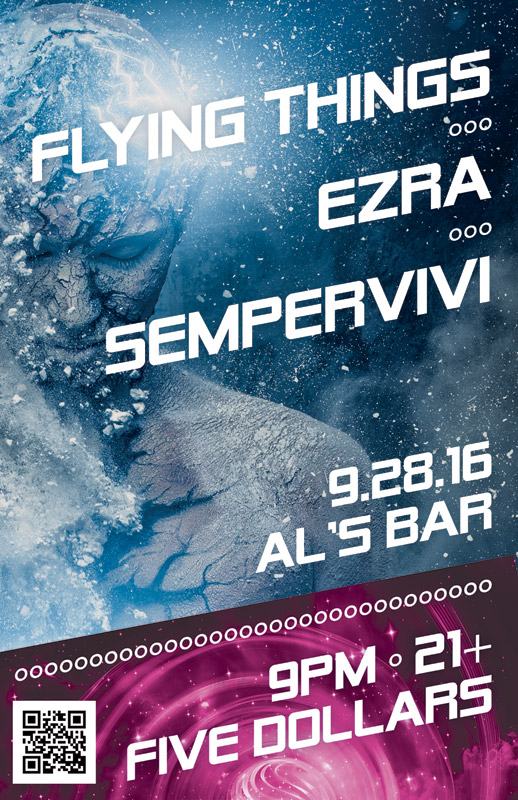 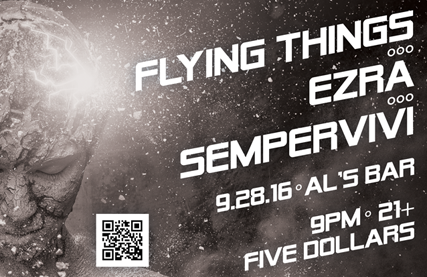 The black and white handbill variation of the band poster design

This 11×17″ band poster design hypes a show featuring indie rock bands Ezra and Flying Things (now known as Lyre) at Lexington, KY venue Al’s Bar. Al’s is otherwise known as “The Greatest Bar of All Time”. I also opened up this show solo with my music project Sempervivi.

I started with two psychedelic stock images. This theme fit the headlining bands’ sounds, which invoke fantasy imagery. I recolored the photo of the grungy space boy in a cool blue. The pink swirl at the bottom began as a full color image. Then I combined them for a futuristic feel.

The white text employs a futuristic, easy to read sans serif. It tilts up at an angle so the information will stand out amidst the chaos in the poster’s background. I created a QR code and linked it to the event page on Facebook, so fans could RSVP with their phones easily.

Finally, I sized down and rearranged the elements into a half page sized handbill. I firmly believe that you don’t necessarily have to spend a ton of money to promote. Black and white handbills are old fashioned. Many people balk at them. However, one more inexpensive way to get your event in front of more eyes can’t hurt.

Get the word out with your own band poster design

I printed the posters and hung them in the North Lime neighborhood where Al’s is located, while Flying Things passed out the handbill version at their school. We all worked hard together and got the word out about the show. Therefore, there was a great crowd at the show, especially for a weeknight in Lexington. Do you play in an independent band? Are you a solo musician that needs some promotional art? Contact me for a rad poster design. 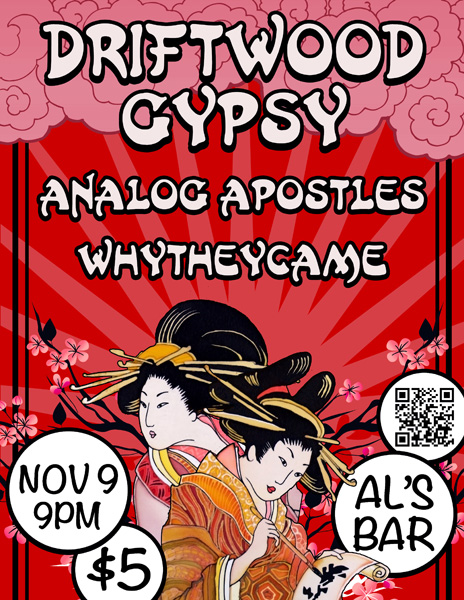 Driftwood Gypsy is a popular jam band based here in Lexington, Kentucky. I played in an alternative indie rock band at the time named Analog Apostles. We shared the stage at this event with them and my friends from Owensboro band Why They Came at local pub Al’s Bar. I had never used an Ancient Japan theme before. Therefore, I thought it would be fun to incorporate one in the concert poster graphic design.