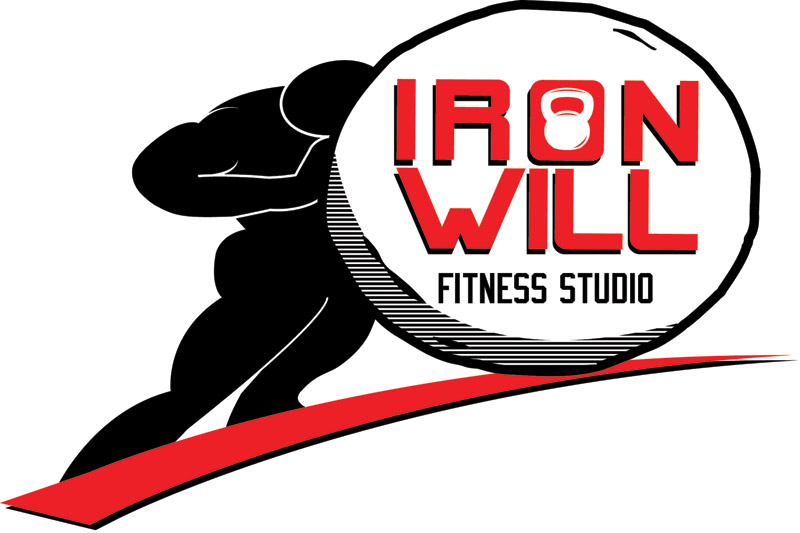 I designed this fitness logo for a new workout studio startup based here on the South side of Lexington, KY. The owner was up against a tight deadline to open his first location. Luckily for him, tight deadlines are my specialty! I was up for the challenge and we worked closely together to bring his original sketch to life. His mark was ready with time to spare, gracing the signage at his independent gym’s grand opening. 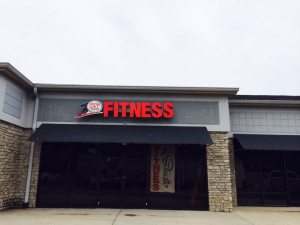 The client provided me with a rough sketch of the Greek mythological figure Sisyphus pushing his fabled boulder up a hill. I thought that was a great representation of building strength through repetition. The original drawing suggested a simplified shadowy figure, so I made the hill a simple “swoosh”, and shaded the boulder with straight black lines.

I chose a modern sans serif and varsity combination to suggest a simple, quick to the point philosophy, while nodding to the athletic clientele. Then I colored the high contrast logo in a black, white, and red combination. You don’t get more clean or powerful than that.

Finally, the simple kettlebell weight silhouette as the negative space in the “O” puts a nice finishing touch on the mark. There is no mistaking that this fitness center is where you go to build strength and become your personal best. The client wanted to keep his options open, so I also provided him with a few other color combinations. As with all of my logos, I Pantone color matched each version. This ensures that the colors display the same, no matter what the application. Find out more about Iron Will Fitness Studio at their website.

Are you opening up a new gym? Perhaps you need to rebrand your existing fitness center. Contact me so we can get started. 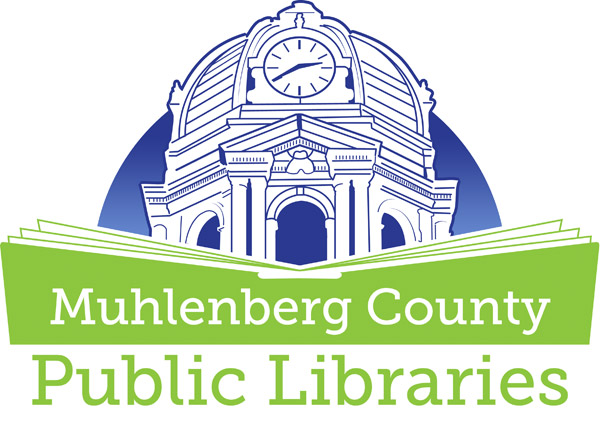 Back in the year 2013, my home county’s library system contacted me for a huge rebranding project. They called on me to create a new public library logo design and website for them. Back when I was growing up in Muhlenberg County, Kentucky, I fondly remember participating in their annual summer reading program each year. I also would often stop in to check out books while I walked home on my way from my school, Greenville Elementary. Because of this, I considered the library logo art project to be a very special honor.

The dark blue and lime green color scheme is strong and eye catching, while still keeping things simple. Depending on the application, I set the background color in either a solid blue, or the gradient fade you see displayed here. As with all of my logo designs, I created a separate, simplified version in black and white. I have always maintained the belief that the best logos can be reduced down to this format. I love going “back home” to Western Kentucky and seeing my work displayed on signage and billboards. The library was such an important part of my childhood growing up in Muhlenberg County. Therefore, it is a good feeling to know that my work represents it to kids growing up there today. 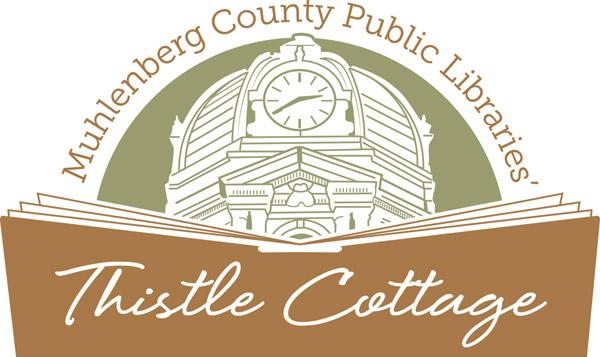 Thistle Cottage was formerly a cultural center that would host touring art exhibits. The city gave it to the public library system in 2013. They then converted it into a museum and art gallery space. MCPL holds their annual community events there as well. These events include their Mother’s Day Victorian Tea party in May, along with their Pictures with Santa holiday series.

A fun handwriting script font comes together in order to spell out the main title phrase “Thistle Cottage”. Once again, I reversed the title out of the large open book shape in white. Then, I made the book shape a bit taller. This way, it would frame in all of the main title text. I kept the “Muhlenberg County Public Libraries” text intact from the original logo design in this particular variation. Then, I arched it around the courthouse image from the original logo in the copper brown shade. Finally, I recolored the county courthouse in the olive shade of green.

The finished product I provided made the staff at MCPL very happy in the end. While it is obviously associated with the Kentucky public library system, the muted color scheme and classic script give the logo a vintage feel of its own.

Are you a library director in the process of launching a brand new library system or branch in your community? Perhaps your own library system has been using the same outdated library logo art for many years. You may very well be in need of an image rebrand! Whatever your situation may be, you should contact me! Everyone in your town will be checking you out! Sorry, for better or worse, I just can’t help myself when it comes to a good pun. 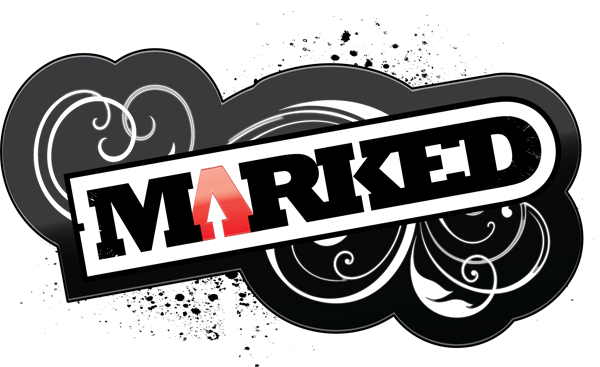 I made this youth camp logo design for a United Methodist Church sponsored camp based in Illinois.  It was an update of their existing logo, which made use of block lettering and a grunge “splatter” element. The Youth Pastor called me to reimagine it with a more modern look and feel.

First, I chose the weighty Rockwell Bold font, which was very popular at this time. A font that strong is impossible to ignore, especially with a high contrast design such as this. Then, I filled the letter “A” in red.  This represents how Christians are set apart (“marked”) for the Lord’s service. Many of my favorite logo designs leave out the bridge in the capital letter A. I felt that this also helps this design stand out in addition to the color variant.

The client encouraged me to use some swirling vine elements, but to make sure they were “not too feminine”. This gives the design some flair, but is not too over the top. I added a thick black stroke outline around the elements to give it plenty of weight and contrast. Tilting the logo upward also helps to catch the eye. Gradient and embossing effects on the letter A, as well as the black background, help give it a high end feel.

The last elements I included were some subtle grunge cracks around the edges of the text, plus a splatter in the background to give it an edge. Finally, I drafted several variations of the concept for different purposes, such as those in which the grunge elements were not appropriate. This kind of versatility is important to clients who may need to appeal to different audiences for funding, for instance.

Does your church or youth camp need a fresh look? Rebranding could be the key to attract new parishioners or campers. I have extensive experience with religious content, as well as decades in the field of high end logo design. Contact me today to get started. 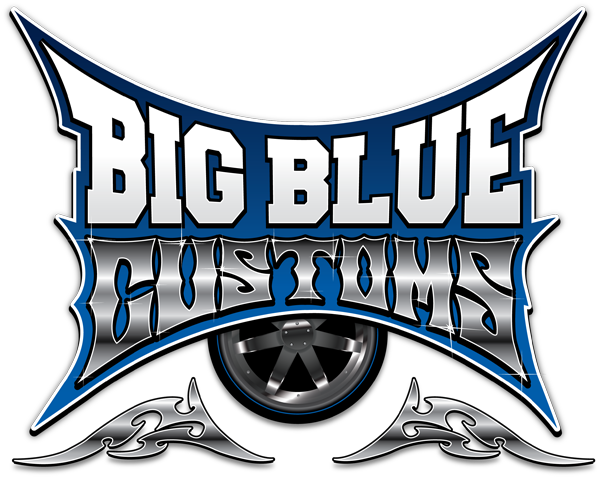 Regular client Chris Curtis, owner of the Chip Magician body shop, started taking on more custom work in 2010. Because of this, he decided to launch a new brand around it. I created this hot rod logo design for him based on a pencil sketch he had drawn up by a third party. Chris needed a masculine, powerful image to represent his brand. The end result needed to retain the attitude of the original sketch, while pumping it up with extreme shine.

First, I started by tackling the color scheme. Here in Lexington, Kentucky everyone bleeds UK Wildcats blue, so I Pantone matched that particular shade for this design’s background. The warped varsity style block lettering in white makes that theme obvious enough. It pairs perfectly with the word “Customs”, appropriately set in a custom font below it. The words are stroked multiple times and shadowed, as is the background. This adds just the right amount of over the top boldness.

Behind the words and background, I added an image of a custom chrome wheel. There is no doubt when you see this that the business caters to an audience who is passionate about customizing their cars. I then framed the wheel at the bottom using two tribal ornaments that subtly suggest flames. Throughout the design, I embellished with chrome effects, gradients, shadows, as well as inner and outer strokes to grab the viewer’s attention. Finally, I added in some extra bling to the corners of the word “CUSTOMS” for maximum shine. There you have it – one high end, hot rod logo design!

Rev your engines! Hire me for your hot rod logo design

If you’re looking for a bold, chromed out logo for your business, then I am your man. Contact me today to get started!

Plumpy'nut is a peanut butter based food used to fight malnutrition in famine stricken countries. A single pack contains 500 calories, can be stored unrefrigerated for 2 years, and requires no cooking or preparation.