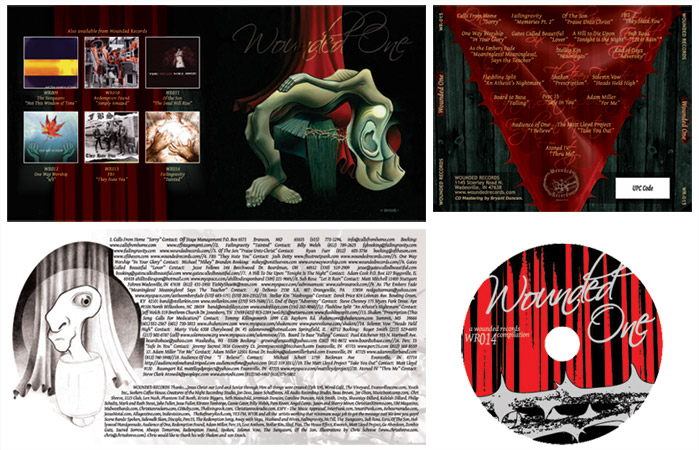 Bryant and Tonja of Wounded Records have been friends of mine since the late 1990s. They liked examples of compilation CD graphic design that I had created for other independent record labels. Thus, they hired me to finish the layout for their “Wounded One” collection of songs from various artists. I was provided with two illustrations created by Chris Shreve for the compilation layout and told to run with them.

I combined Shreve’s drawings with my own additional design elements to complete the story. For instance, I echoed his bright red curtains in the cover on the back cover, booklet back, and CD face. Both the drawing and the label’s logo feature a crown of thorns. I also incorporated thorns in the back cover composite shape and the CD face elements. I added my own green tinted wood texture for the back cover background as well. To enforce the serious, somber tone of the provided art, I used a calligraphy script for the main title. I combined that with a serif font for the rest of the text. Since there was a large amount of copy to set in the inside of the booklet, I justified the paragraphs. I also moved the left side text to wrap around the black and white illustration. Underneath the text, I placed a faded photograph of a field of thorns. This completes the jewel case for the compilation CD graphic design. Finally, I made the CD face itself a two color silkscreen art. I simplified the curtains into solid shades of red and black. I then reversed the thorns at the bottom and the text out, so the bare mirrored silver of the CD shines through. This combination is very effective, since it is makes the most of the color limitation, while simulating three colors and adding an air of prestige.

Is your record label releasing a comp and looking for the right album art? Look no further. Contact me today to get started!
Tagged With: comp, evansville, in, indiana, wounded one, wounded records